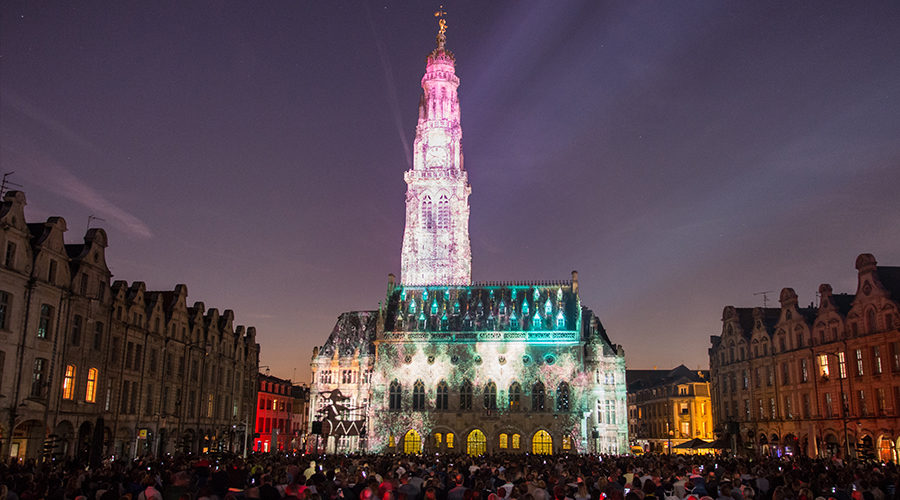 The Video Mapping Festival ended this Saturday 1st of September in Arras, with from 15 000 to 20 000 people attending the event on the Place des Héros. Time for us to review this first edition.

In the end of 2017, Rencontres Audiovisuelles decided to launch a festival entirely dedicated to video mapping, in order to focus on this emerging discipline which is growing significantly.

A few months later, the first edition of the Video Mapping Festival was born, with the ambition to expose the video mapping in all its forms (monument, object, video game, immersive, interactive video mapping…) and to offer contents aimed at the general public, as well as professionals and students in international animation and video game schools.

The 1st edition in a few numbers:
– 11 steps in the Hauts-de-France region from March to September 2018
– 56 creations from international and regional artists and students
– 14 mapping workshops led with local inhabitants
– 200 professionals attending a 2-day international seminary
– A total of more than 120 000 spectators!

Supported by the 1st edition’s success, Rencontres Audiovisuelles are proud to announce the Festival’s 2nd edition:

IBSIC – Image Beyond the Screen International Conference
28th & 29th of March – Arenberg Creative Mine
International professional seminary
The conference is adressed to researchers and professionals who wish to discuss the identity, the practice and the uses of video mapping through case studies, experience feedbacks and theoretical and critical thinking.

OPENING WEEK-END
29th & 30th of March – Lille
Video mapping tour in the city
Only proposed on the Friday night in 2018, the video mapping tour in Lille will happen on 2 nights this time, so everyone can benefit from it!
In 2019, the Video Mapping Festival will associate its forces with Séries Mania, another event launched in 2018, for an audiovisual crossover guaranteeing an exceptional week in Lille in the beginning of Spring!

AROUND 15 EVENTS IN REGION
April > August – Hauts-de-France Region
From April, the Video Mapping Festival will cross the region to propose original creations, close to the Hauts-de-France inhabitants.

CLOSING NIGHT
31st of August – Arras
Video mapping tour in the city
In 2019, the closing night in Arras will increase and will offer, in addition of the mapping on the Beffroi, a video mapping tour all over the city center. A nice highlight in region, to celebrate the end of the Festival!

In order to maintain a free, popular, federating and high-quality event that values our region while driving the development of the video mapping field, we call on the generosity of the companies and the indiviuals to strenghten the support of the public authorities.

Flashback on the Video Mapping Festival #1!