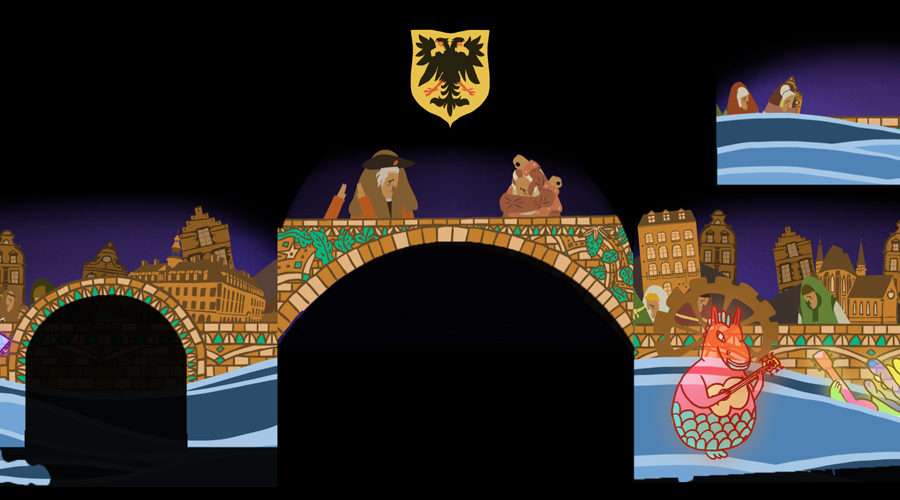 Caution: for some indoor locations the number of people we can let in is limited, a waiting line is thus possible.

Underground video mapping in this medieval canal, which will reveal its treasures for the Video Mapping Festival.
Immersive video mapping created by Maëva Jacques and Claudia Cortés Espejo (Belgium) during a 3-week creation residency at Arenberg Creative Mine in February and March 2018.

The monsters’ theatre
The City of Lille used to be called “Isla” from the Latin “Insula”, and was literally an island surrounded by the Deûle. The Canal Saint-Pierre was one of the numerous canals that encircled the city. Although it is now burried under the ground and hidden from the passers-by’s view, that place seems to have kept within its walls all of the echoes from the past. A mysterious atmosphere emerges, opening the doors of imagination.

“Attracted by that curious mix of history and dreamlike atmosphere, we decided to tell the story of Lille and the Canal as a tale, outlining its history from its creation until its closure. All from the point of view of the monsters which seem to live inside the canal from time immemorial.” Maëva Jacques and Claudia Cortés Espejo

► The artists Maëva Jacques and Claudia Cortés Espejo will present their work and come back to the creation residency during a meeting at L’hybride, on Saturday 24th of March, at 4.30 pm.

Meeting with the artists of the Lille video mapping tour
Saturday 24th March 2018 – 2 pm > 12 am
L’hybride – 18 rue Gosselet, Lille
Presentation of the works, followed by a cocktail with the artists
+ more info here